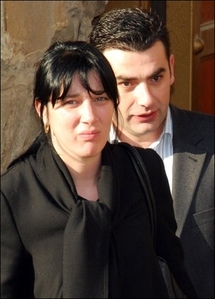 On December 15, 2013, The House of Muhhrani, a noble Georgian house, recently made the following announcement:

"With much regret, I announce the end of my marriage with Anna Bagrationi, which I thank for the wonderful son we have in common, H.R.H.Giorgi Bagration Bagrationi, declared as future heir of the Bagrationi Dynasty by His Holiness Patriarch of All Georgia Illia II in the day of His Baptism on November 3, 2013, who like his Father, Grandfather and ancestors, will hold the title of Prince of Mukhrani.

Rumor says the divorce is because of adultery on the part of David with an acctress, but the relationship was stormy from the beginning. Prince David first abandoned HRH Princess Anna after he refused to sign an agreement to follow the Ancient Sovereign Succession Rules of the Royal House, which would enable any child born of the couple to be heirs. The Patriarch convinced Princess Anna to follow David back to Spain, but here David again abandoned her and the Patriarch of Georgia supported her for many years pleading with her not to come back to Georgia. Therefore, the announcement was not unexpected. The wrongs committed against Anna were intolerable.

This sad news of a failed marriage, however, is further blighted by the fact that His Holiness the Patriarch of All Georgia never declared Prince Giorgi Bagration Bagrationi was the heir to the Royal House of Georgia on the day of his Baptism as proclaimed in the above announcement by Prince David. Prince David's websites often misinform rather than report facts.